Fixed the annoying rocket-ladder with a workaround; I found someone else who had the same problem as me, but no help from the forum. So I scrapped the trigger object I was using as a ladder and instead created an invisible block with no physics or collisions and placed it on top of the ladder graphic. Each frame I check to see if the guy is inside the invisible box, and if he is, it applies the ladder behavior. Problem solved.
Now I’m working on ramps; the way I’m doing collision detection doesn’t quite account for it, and so he falls up and down them instead of running up and down them. Pretty sure I can find a way to fix this without too much work, but I’m starting to get a little burned out; the rocket-ladder thing took me most of the last 5 hours.
I’m trying out Google Drive as a place to keep my EXEs uploaded. I’ve started updating the box to the right that shows when the last one was updated, and includes a link to the latest version. Let me know if anyone has any issues downloading it; I’ve never tried Google Drive before.
Learning to use TorqueScript has taken more effort than I initially thought. I’d assumed that it would be essentially pure C# with some added global variabels and built-in classes, but it turns out that there’s a lot more to it than that. It’s also been surprisingly difficult to find basic reference material. I’ve been chasing down a bug for hours now, and it turns out that you can’t compare strings using the usual “==” operator; instead there’s a special operator for that, $=. It’s also taken me a while to get back into the hang of a C-based language instead of Python. If I had a dollar for every semicolon I’ve left out since I started working in this language, I could afford a “you’ve got too much money” discharge from the Navy. And if doesn’t help that the compiler doesn’t catch errors; it’ll go right ahead and run anyways, just ignoring any statements that don’t make sense to it. It took me almost three days to figure out how to bring up the error-reporting console.
Long-story short, though, I’m finally starting to get the hang of it. I grabbed some sprites off of David Hellman‘s (the guy that did the artwork for Braid) site, just for something to use. Adding in new animations revealed a couple issues that weren’t too hard to fix, and it’s much more satisfying now that I have visible proof of progress instead of just the understanding that “It’ll look cool somewhere down the road, but it’s doing what it’s supposed to now.”
I’ve got collision detection down with the exception of ladders. I’m not entirely satisfied with the way it handles what happens once you’ve climbed to the top. More importantly, whenever you jump onto a ladder, it propels you skyward like a little rocket launcher. I figured that it had something to do with the way I turn off physics when you get on a ladder and turn it back on when you leave, but I’ve added a statement that displays a message every time the physics status changes, and I’m wondering if there isn’t something else going on in the background that just happens to look like my ladder-physics. I’ll get it narrowed down eventually. After that, I need to start working on one-way platforms (which I can probably use to fix my at-the-top-of-the-ladder issues) and then start working on enemies.
Lots of work to do, but it feels good to be back in the groove.

Shortly after the last entry, my laptop went up in metaphorical flames. It wouldn’t boot at all, and wouldn’t recognize the windows boot disc. Something was wrong with the hard drive, and the only thing I could do was boot to Ubuntu and reformat the entire thing. I did manage to save the most recent backup of everything, but the event forced me to really think about how I’d programmed everything, and I came away from it wanting a redesign. I mean, my level was a text file full of 1s and 0s! There’s nothing efficient about that.
So I took some time off from it; numerous underways, spending time getting ready for college, moving in to a new apartment, relaxing after deployment. Last week I found myself describing the game to someone, and it got me all excited again. I wanted to keep working at it, so I took another look through my options.
When I first started, I attempted everything using Adobe Flash and ActionScript. Very quickly the entire thing bogged down; ActionScript just was not meant for something of that magnitude.
Next I tried Construct by Scirra. I made a pretty decent amount of progress off of that, and a lot of the earlier posts on here all refer to that version. However, it was a little too simplistic, and the actions weren’t customizable enough for my needs.
I spent deployment learning Python and using the Pygame library. In the end, this probably would have worked fine, but it would have required a redesign simply because of the way I initially created the framework.
So now I’m working with Torque 2D, which is the engine And Yet It Moves was created with. It combines a level editor with a physics/collision engine, and scripting based off of C# for everything else. I was really hoping that the physics engine would do most of the collision detection for me, but I’ve been running into issues, and I’m getting super frustrated. Why is it that collision detection is always the hardest part of everything I program? There are a few things in Torque that are specially designed for it:
PickLine/PickPoint are supposed to return a list of all objects that intersect the given line (or contain the given point) but I’m having issues with using that with image maps, and testing to make sure that the object returned isn’t something that the player should be able to walk over (i.e. a background image).
CastCollision sounded perfect; you pass it a time, and it looks into the future and tells you if the parent object will experience any collisions within that time. As you can imagine, this is pretty processing-intensive, and it wasn’t reacting the way I hoped.
So for now, I’m sticking with just the built-in physics, and adding actions to the onCollision callback. I’ve made a decent amount of progress over the past couple days, and I’m confident that I’ll have it working the way I want it soon.
In the meantime I’ve been looking back over the plot and storyline, and adding in some extra dream sequences and rewriting the way I want the waking sequences to go. I think it’ll be a more natural flow of events, and will feel less like something a third grader made.
Once I have something worth showing, I’ll get back into the habit of uploading EXEs. Until then, I’ll leave you with a piece of my loading screen. 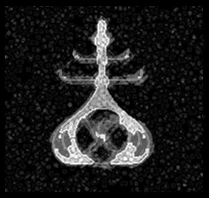 Other Indie Games in Progress